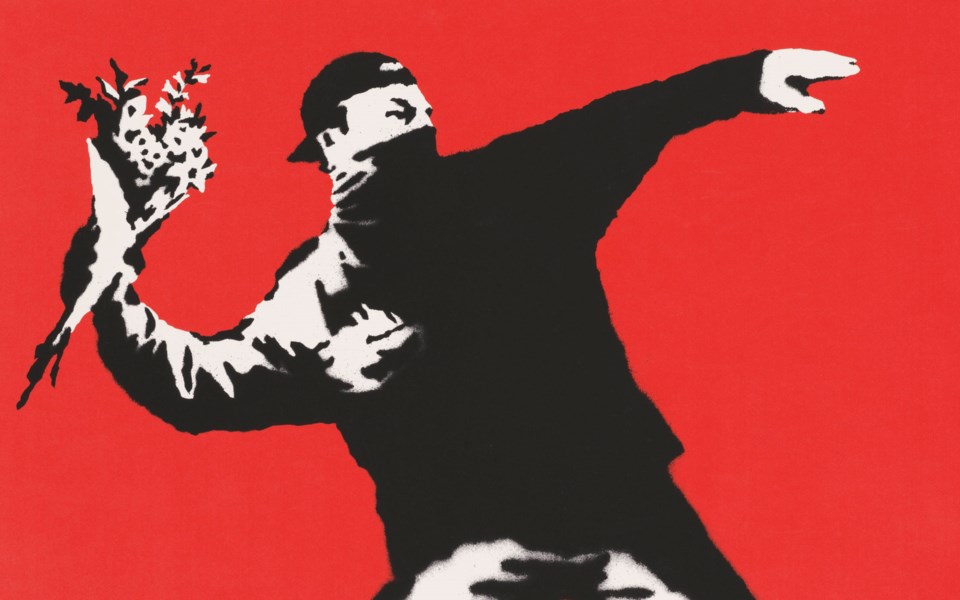 'Banksy: I can’t believe you morons actually buy this sh*t’ is cheekily titled in homage to the artist’s Morons screenprint. The source image of this work is a photograph of the record-breaking sale of Vincent van Gogh’s Sunflowers at Christie’s in 1987, with van Gogh’s canvas replaced by Banksy’s text.

The sale will feature some of the artist’s best-known and coveted screenprints. Currently open for consignments, please get in touch for a complimentary valuation.

James Baskerville joined Christie’s in 2014 and is a Specialist with a depth of knowledge spanning from Old Master Prints to Contemporary printmaking. As a valuer and business getter for the London auctions, James travels mainly in the UK, Belgium, Germany and Scandinavia and is heavily involved in the Old Master Prints auction held annually between London and New York.

Some of James’s favourite past consignments include the pair of Andy Warhol’s Moonwalk which set a record price for the subject at auction (sold for £341,000, March 2019) and works from the collection of Dr. Heinrich Becker including a rare impression of Edvard Munch’s The Girls on the Bridge (sold for £125,000, September 2017); as well as rare editions sold by Private Sale.

As Head of Sale for Banksy editions at Christie’s, James has a keen interest in contemporary printmaking and has set the record price for a Banksy print with Girl with Balloon - Colour AP (Gold) (sold for £395,250, September 2019) and for STIK, with the deluxe set of Liberty (sold for £200,000, September 2019). James also consigned and curated the online auction Feelings in Colour, a celebration of Howard Hodgkin’s graphic works which set a record price for an editioned print by the artist with the monumental As Time Goes By (Red) (sold for £68,750, April 2019).

He read Art History at University College London, where he gained a Masters degree with distinction in History of Art in 2013 with a thesis on Albrecht Dürer’s engraving Adam and Eve.