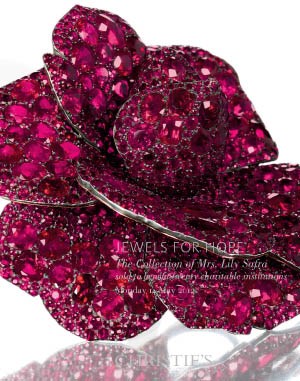 The highly anticipated auction of ‘Jewels For Hope: The Collection of Mrs. Lily Safra’, held on the evening of May 14 at Christie's Geneva, realised a total of US$37,924,551 / SFr.35,115,325.  100% sold by lot and by value, this superb collection far exceeded its total pre-sale estimate. As a result of its success, The Lily Safra Foundation has decided to donate the full proceeds of the sale not only to the 20 charitable institutions previously announced but also to 12 additional organisations.

The extraordinary group of 18 jewels by JAR, the largest ever seen on the market from a single-owner collection, sold 100% by lot and by value, totaling US$11,473,920 / SFr.10,624,000 and becoming the most valuable private-owner collection of JAR jewels ever sold at auction.

Mrs. Lily Safra declared: “From the bottom of my heart, I want to thank everyone who participated in this evening’s success. I am overjoyed, knowing that so many people in need around the world will benefit. Like the jewels sold tonight, these extraordinary organizations make the world a more beautiful place, and it is a great privilege to be able to support them. I am also delighted to announce that due to the success of the auction, 12 additional organizations will each receive $1 million in support of their work”.

Rahul Kadakia, Head of Christie's Geneva and New York Jewellery Departments, commented: “After having achieved a world record total for a jewellery charity auction, Mrs. Safra received a standing ovation as she walked into the saleroom at the end of the sale to thank every buyer and bidder who contributed to this evening’s great success. Christie's is proud to have been part of such a major philanthropic event”.